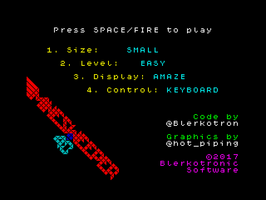 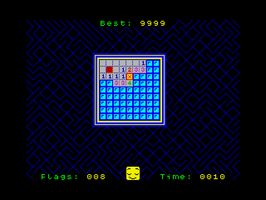 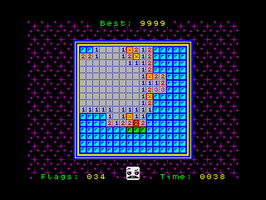 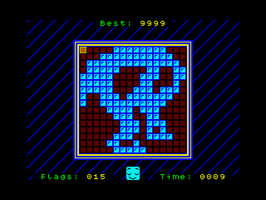 Some months back, shortly after finishing the compiled version of BREAK/SPACE, I was walking back from lunch and contemplating having a serious stab at learning Z80 machine code 'properly'. The trouble was, I needed a project to help me along and starting with something that relied on complicated stuff like 'sprites' and 'timing' seemed like a direct route to failure. So I started thinking instead of the types of puzzle that I like, and if any of those would fit the bill. And after a bit of a think, I decided that Minesweeper was both simple enough to be doable and complex enough to be a bit of a challenge. And my journey began.

It's been fun. I expected the learning process to be many things, but 'fun' seemed unlikely. I was wrong, though - it's been a blast from start (getting a dev environment and workflow together) to finish (figuring out how to squeeze every last byte out of the 16K machine). I've learned a huge amount and produced something that not only functions but seems relatively slick to boot - and I'm especially proud of that aforementioned 16K version. Best of all, I can now tick 'write a game in machine code' off my bucket list - 10-year-old me would be in awe that we finally managed it after all this time.

This is a public beta of the game rather than a final release - it's feature complete but missing its proper loading screen and still has a few placeholder graphics (which I drew myself, I'm very, very sorry). I really wanted to get it out there and let people have a play, though, so thought an early launch would be ideal for helping me get the bugs out while @hot_piping finishes off his lovely artwork.

I hope you enjoy playing it as much as I enjoyed writing it!

A strategic puzzle game for the 16K, 48K and 128K Sinclair ZX Spectrum.